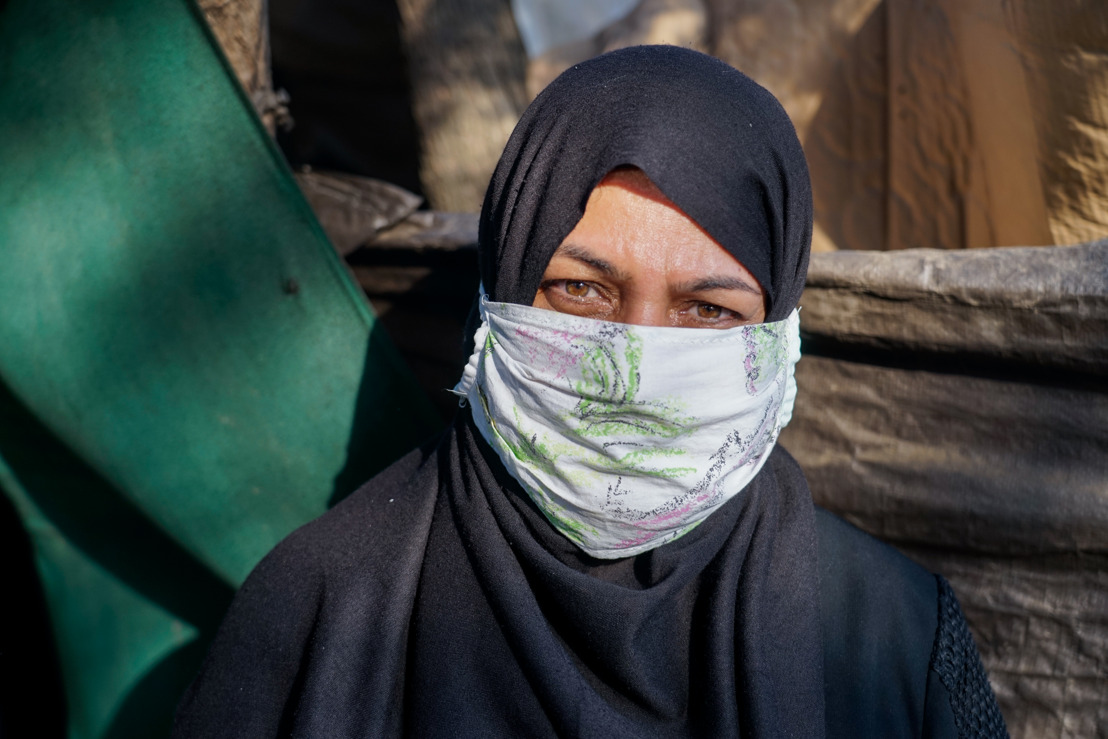 People are locked in dirty containers, most of whom are sleeping on the floor while some do not have running water or toilets. In other containers the floor is completely broken and has holes. People in quarantine have very limited access to basic services including sanitation, but also food, which as in the rest of the camp sometimes continues to be inedible. To date, there is no communicated medical response plan from the competent authorities.

MSF has patients, including people with mental health problems, pregnant women and survivors of sexual violence, who are extremely vulnerable and can become even more vulnerable being kept in these atrocious conditions. Many people in the camp have reported to MSF health promoters that they will not go to the doctor in the camp because they fear the terrible conditions in the isolation containers.

Oumaima Alhabib is 52 years old and from Deir ez-Zor in Syria. Oumaima suffers from asthma and her husband has hypertension and cardiovascular problems. Today, they live in Vathy camp with their three children who are 11, 14 and 18 years old.

Oumaima and her husband have been in Vathy camp for one year, and both are at high-risk from COVID-19 due to their medical conditions.  With an outbreak of the virus in the camp and the lack of medical response plan in place from the competent authorities, the couple is very worried for their health.

"We have been in this camp for one year, it is a terrible camp; full of rats, dirt, there is not enough food and all of this causes mental health problems.

"The health system in the camp has deteriorated and, because I am asthmatic, I don’t want to see the doctor here because I am afraid of being put in quarantine.

"I prefer to be in my tent which is full of rats and snakes, but at least I am not going to be in direct contact with other sick people from different communities in the same container.

“We left Syria because of war, after our house was bombed and my 19-year-old daughter and her husband were killed.

“The war destroyed our lives in Syria. We had nothing left and when I lost my daughter, I started suffering from mental health problems.

“The trip from Syria to Greece took us three months. We were put in prison three times in Turkey for trying to cross to Greece, and when we eventually managed to escape the Turkish coastguard, we were drifting in the sea for 12 hours. The trip was dangerous, and we didn’t know if we would make it to shore. I was dizzy the whole time and very scared.

“All we wanted and still want, is to find healthcare and a safe place. We are afraid of COVID-19, as in these living conditions it is impossible to protect ourselves or isolate. My children have also developed mental health issues due to living in the camp.

“My 11-year-old boy is afraid the whole time and very stressed, and his behavior has become more aggressive. Three days ago, he said he wanted to throw himself in the sea. Sometimes he says he wants to go back to Syria. This camp is not a place for children. This is not a place for anyone.

“We do not have hope anymore. I am trying to motivate my children, to tell them that one day we will have a house again and they will be able to go to school again, they will have games and we will build a new life. But it is impossible to convince them of this when we have been stuck in this camp for a year.

“We were forced to leave our home because of the war. We thought that in Europe we would be able to rebuild our lives, but what we found here was shocking. I used to have a lot of dreams for the future of my children. We are a well-educated family. Both my husband and I were primary school teachers in Syria. We are just a family that lost everything in the war. We came here to find a safe place and education for our children, that’s all.”

For more than six months MSF has been calling for urgent transfers to the mainland of the elderly and people with chronic and complex medical conditions, however these people are still forced to live in tents and containers without being able to adopt any of the recommended measures to protect themselves from COVID-19. In Samos today, there are about 40 families among whom are individuals at high risk of COVID-19 who could face life-threatening consequences if not protected.

Miriam Molenaar, MSF project medical referent on Samos, said:
“Many of our patients are still living in abhorrent conditions, pregnant women and people with vulnerable conditions such as cardiovascular and pulmonary diseases as well as diabetes, all at high risk for COVID-19. These people should have been moved to the mainland months ago. Here the makeshift tents are surrounded by trash and rats are crawling around. Enough is enough."

Vickie Hawkins, executive director MSF UK, said:
“Rather than trying to shut down routes to sanctuary in the UK for refugees in Europe as we have seen recently in Parliament, the UK Government can and should resettle more vulnerable people from camps like Vathy and elsewhere. The COVID-19 pandemic makes it even more urgent that the Government respond to a situation that was already desperate.

“In the next few weeks MPs will have another chance to make sure lone refugee children can reunite with their families in the UK. I hope that those who claim Europe is a safe place take a look at what’s happening right now on Vathy and see one more reason as to why they should vote to save refugee family reunion and preserve one of the few remaining safe routes to the UK.

“The UK Government must also stop supporting any refugee policy that traps people in horrendous conditions like those on Vathy in an attempt to deter others from arriving, and withdraw that support publicly. These policies only create misery and human suffering.