“The men, women and children on board have survived horrific abuse in Libya, have been shipped from one boat to another like commodities, and have endured the elements on an unnecessarily long and treacherous journey at sea. This disembarkation is the end of an ordeal but is in no means a celebration. Italian and European governments have shamefully failed these people. They have placed politics before people’s lives,” says Karline Kleijer, MSF’s Head of Emergencies in Amsterdam.

After a rescue, people should be disembarked in the nearest safe port available as stipulated by International Maritime Law. Italian authorities have disregarded people’s well-being and instead, instructed Aquarius to transfer people to Italian ships and embark on a four-day trip to Spain, exposing already vulnerable people to further suffering.

“Italy’s decision to close its ports to MSF is a disgrace, particularly as the rescues were done under the coordination of the Italian Maritime Rescue Coordination Centre (MRCC). Italy has been toying with the lives of 629 rescued people by denying them disembarkation in the closest port of safety”, says Kleijer.

Some 400 rescued people who were on board Aquarius until last night were initially rescued by Italian ships, then transferred to the Aquarius over the weekend at the request of the Italian MRCC. Only to be transferred back to Italian ships two days later. “Italian authorities are moving people around like chess pieces for political point scoring. Vulnerable people are used as pawns to put pressure on EU member states to fix the broken asylum system and address the failure of European states to relocate asylum seekers who arrived in Italy, their entry point in Europe.”

The dirty political game played between Italy and other European governments is not only affecting those recently rescued but also reduces search and rescue capacity in the central Mediterranean. Having the Aquarius sail to Spain forces it to spend longer out of the search and rescue zone, thus endangering many more lives. 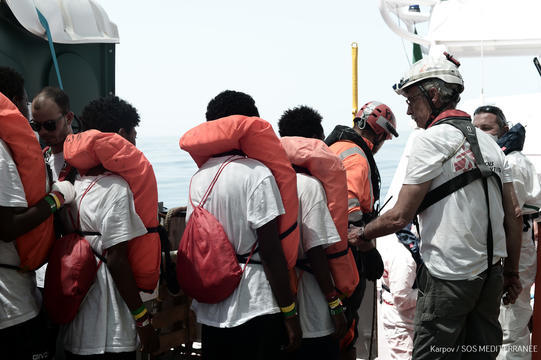