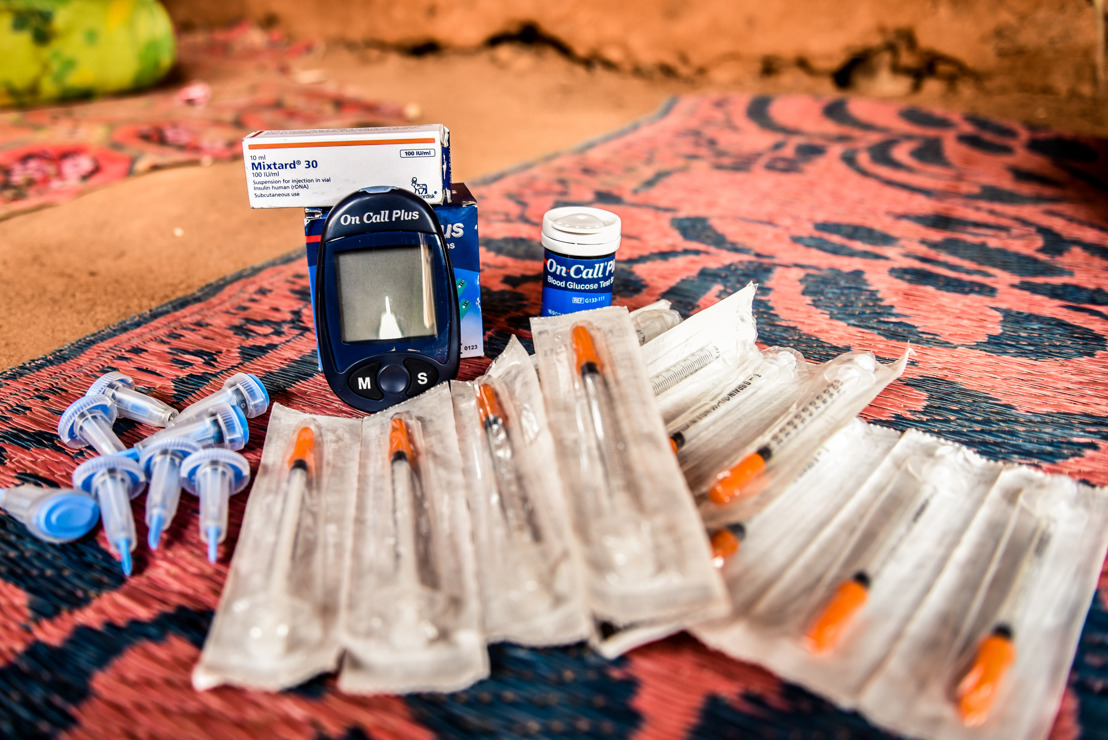 Diabetes requires an extremely precise form of daily treatment, whereby patients have to inject themselves with several doses of insulin every day, which are suited to their diet and physical activity. If treatment is not well managed, it can have extremely serious consequences: coma, blindness, amputation or even death. Patients must therefore keep a supply of insulin which, according to pharmaceutical protocol, must respect the cold chain from production to injection. However, this presents real challenges in contexts where not every household has a refrigerator.

“The current pharmaceutical protocol requires insulin vials to be stored between 2° and 8°C until opened, after which most human insulin can be stored at 25°C for 4 weeks,” explains Philippa Boulle, a non-communicable diseases advisor at MSF. “This is obviously an issue in refugee camps in temperatures hotter than this, where families don’t have refrigerators. People with diabetes thus often have to travel to a hospital every day for their insulin injections, which can prevent them from working or force them to travel long distances."

Faced with this issue, MSF teamed up with UNIGE to test insulin storage in real conditions, mirroring the temperature of a home in the Dagahaley refugee camp in northern Kenya which fluctuates between 25°C at night and 37°C during the day. The researchers then meticulously reproduced these conditions in a laboratory setting, where they tested insulin storage over four weeks which corresponds to the time it usually takes a diabetic person to finish one vial of insulin.

“As insulin vials can be used for four weeks after opening, we carried out our measurements over the same time-frame, first with vials kept at the temperatures found in Dagahaley, and then with ‘control’ vials that were refrigerated,” explains Leonardo Scapozza, a professor of the School of Pharmaceutical Sciences in UNIGE’s Faculty of Sciences.

“The risk is that insulin, a protein, precipitates under the influence of heat. In other words, it would begin to form ‘flakes’. Since the insulin is no longer in solution, it can’t be injected,” says Scapozza.

Results: No difference between the two storage methods

The findings published in the journal PLOS ONE, demonstrate that the stability of insulin stored under these conditions is the same as that of cold-stored insulin, with no impact on efficacy.

The research results show that all the insulin preparations stored at fluctuating temperatures, as encountered in the field, recorded a potency loss of no more than 1%, just like those kept in cold storage during the required four weeks. Crucially, the UNIGE researchers also observed that insulin activity was completely maintained. To verify this, they tested the action of insulin proteins on cells, compared with that of insulin that had been intentionally deactivated.

“The regulation on pharmaceutical preparations allow a loss of up to 5%, so we are well below that,” says Professor Scapozza. “With the help of Professor Michelangelo Foti’s group, we studied insulin vials that came directly from the Dagahaley camp, and always reached the same conclusion: the insulin was perfectly usable."

“These results can serve as a basis for changing diabetes management practices in low-resource settings, since patients won’t have to go to hospital every day for their insulin injections,” states Dr Boulle.

“Of course, this will have to go hand-in-hand with educating patients, as well as providing support and follow-ups so that people with diabetes can measure their blood sugar levels and inject the right amount of insulin. This will allow people to manage their illness correctly, and more independently. The ability to self-inject insulin is a fundamental aspect of diabetes self-management and the ability of people with diabetes to be empowered for their health.”

“MSF is now calling for a consensus statement endorsed by the World Health Organization (WHO) to support the use of locally produced cooling devices for the home storage of insulin in order to dispel the notion that refrigeration is needed in every situation. Additionally, we hope that pharmaceutical corporations would urgently submit to regulatory authorities for use of insulin under expanded temperature ranges. It is time to ensure that everyone who needs insulin, regardless of where they live, can access it. For too many people living with diabetes, life is difficult enough without this burden.”