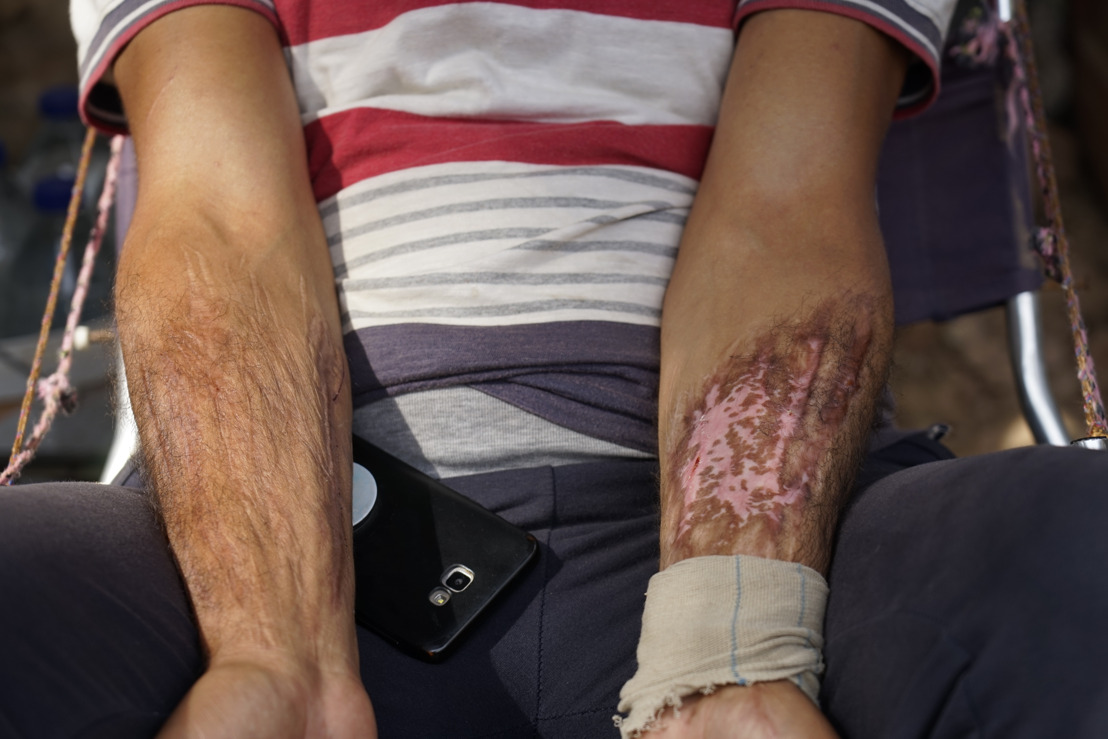 In Samos, 3500 people are squashed in a center for 648 in absolutely miserable conditions, most of them living in makeshift tents in the forest next to the official facility, lacking access to enough showers and sanitation as well as appropriate shelters to keep warm.  Our mental health team in Vathy camp has recently seen a concerning rise in patients presenting severe symptoms as it has done several times already in 2020.

In November, 60% of our new patients presenting to our clinic were expressing suicidal thoughts and 37% were considered by our team as at risk for suicide. The situation is being monitored by our team.

In Lesbos, more than 7,000 asylum seekers, 2,500 of them children, continue to live in tents frequently flooded due to the inadequate shelter against the elements. Recently, the horrific episode of a three-year-old girl raped inside the camp showed the shocking inadequacy of the protection measures available in the camp as well the urgent need for safe and dignified accommodations for the most vulnerable. Since the fire and the transfer to the new camp, MSF’s child psychologists have continued to note concerning symptoms in our patients which have all triggered different symptoms, including sleepwalking, nightmares, regressive behavior, as well as self-harm and suicidal ideation.

In 2020, our child psychologists have treated 49 cases of children with suicidal ideation and suicide attempts.

The children that we see in our clinic are afraid most of the time. They were traumatized before the fire, and re-traumatized during and  there-after. They are afraid of the strong winds that they fear can make the tents collapse, they are afraid of the dark and when  going to the toilet. Many have witnessed family members being assaulted or raped during the war they fled from and they are afraid it will happen again. Even in their sleep they cannot relax. A new observation we have made since the fire is that children have started to sleepwalk dreaming they have to run away to be safe. Some have walked to the water, for others the parents tie the children to their wrist at night to keep them safe.

“After each critical and harmful event, such as the fires, the recent earthquake, the lockdown, we have seen an increase of severe cases in our clinic, with a deeply worrying rise in suicide and self-harm thoughts from people trapped in the camp.”

“The protracted containment in poor living conditions and ongoing uncertainty regarding asylum claims contribute to exacerbate mental health difficulties among residents of the camp, many of who have already experienced traumatic events in their country of origin or during their journey to Greece. Without these issues being addressed, it is impossible to provide effective treatment to our patients. They need a safe and stable environment in order to recover.”

“We continue to see hopelessness, despair, depressive symptoms and some extreme cases of reactive psychosis, self-harm and suicidal ideation."

“The most severe cases of children we see are those who want to be isolated or express the desire to end their lives. They want to be inside the tent all the time, they do not want to socialize and they wish to die actually, to stop the pain. To stop feeling like that.

“Despite EU promises, the fires in Moria, Samos and Chios have not burnt down the harmful logic of containment on the Greek islands and people will have to face another winter in inhumane conditions exposed to the elements, in absolute despair, this time amidst a global pandemic."

“To make it worse, the future looks even more hopeless. A new “multi-purpose reception and identification centre” has been built 5km from Vathy camp in an isolated spot waiting to be inaugurated and another one will be created in Lesbos. Extensive barbed wire intends to contain people, and even surrounds children’s playgrounds. Let’s be very clear, these dystopian plans will only renew the inacceptable EU migration strategy, leading to more unmeasurable human suffering, making it even more invisible.”

MSF urges the EU and Greek authorities to move all asylum seekers, especially the most vulnerable, immediately to safe accommodation and to reconsider the unacceptable commitment to large, new closed camps at the borders, which will only further entrap people and exacerbate mental health issues.  The Greek authorities should also take measures to improve special guarantees for mental health patients on the islands, and evacuate the most vulnerable to safe accommodation on the mainland or other EU states.