The violence in Honduras, Guatemala and El Salvador continues to force thousands of people to head north in search of refuge, even as the Trump administration imposes cruel practices intended to deter them from seeking asylum. Mexico is effectively becoming a final destination for thousands of vulnerable refugees and migrants, left exposed to further violence by criminal gangs who prey on them.

"We are seeing a population that is increasingly trapped in Mexico. They can´t return to the countries they escaped from for fear of violence. And now they can’t find safety in the US as the administration punishes those who try to cross the border with increasingly harsh and cruel measures,” says Marc Bosch, MSF's Operations Manager for Latin America.

“We are alarmed by the terrible policy of separating children from their parents. This will be compounded by the recent US decision not to accept gang violence or sexual violence as the basis for asylum claims,” adds Bosch, as last week US Attorney General Jeff Sessions ruled that people submitting claims related to domestic violence or gang violence will not qualify for asylum—a decision that effectively closes the door to many Central Americans fleeing for their lives.

Staying in Mexico is not a viable alternative for many people who fear the violence of criminal organizations there. The deadlock is particularly brutal for minors, whether traveling alone or accompanied. Women, children, and members of the LGBTQ community are more vulnerable to certain types of violence and require specific protection measures that are not effectively in place in Mexico.

"Mexico should be able to guarantee protection, healthcare and safe passage to migrants and refugees. The US also needs to fulfil its international responsibilities and recognize the status of asylum-seekers and refugees. The US continues to have an essential role to play in addressing this humanitarian crisis,” says Bosch.

In 2017, the scale of the crisis led MSF to publish a report which found that 68 percent of the migrants and refugees interviewed by MSF had been victims of violence during their transit towards the US. Nearly one-third of the women surveyed were sexually abused during their journey.

The unprecedented level of institutional violence from the US is causing greater suffering to a population that has been subjected to tremendous violence in their countries of origin and in their transit through Mexico. People seeking safety and their children should not be prevented from claiming the protection they need.

MSF provides medical and mental health care to migrants and refugees from Honduras, Guatemala and El Salvador moving along the transit routes through Mexico. We work in migrant shelters and mobile clinics along the railway lines and in three locations on the migrant routes (in Tenosique, Coatzacoalcos and Reynosa). We also run a comprehensive care centre for victims of extreme violence in Mexico City. This centre opened in 2016 in response to the medical and humanitarian needs of people in transit. 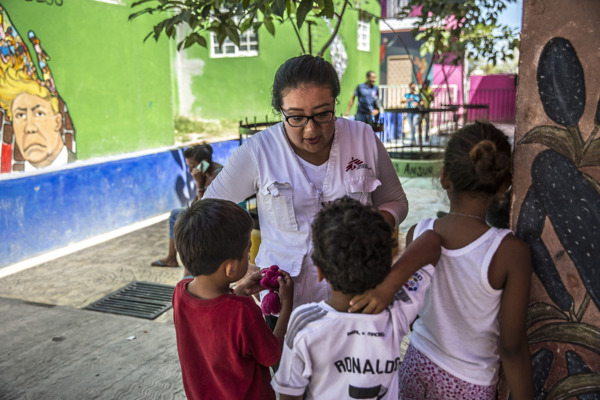