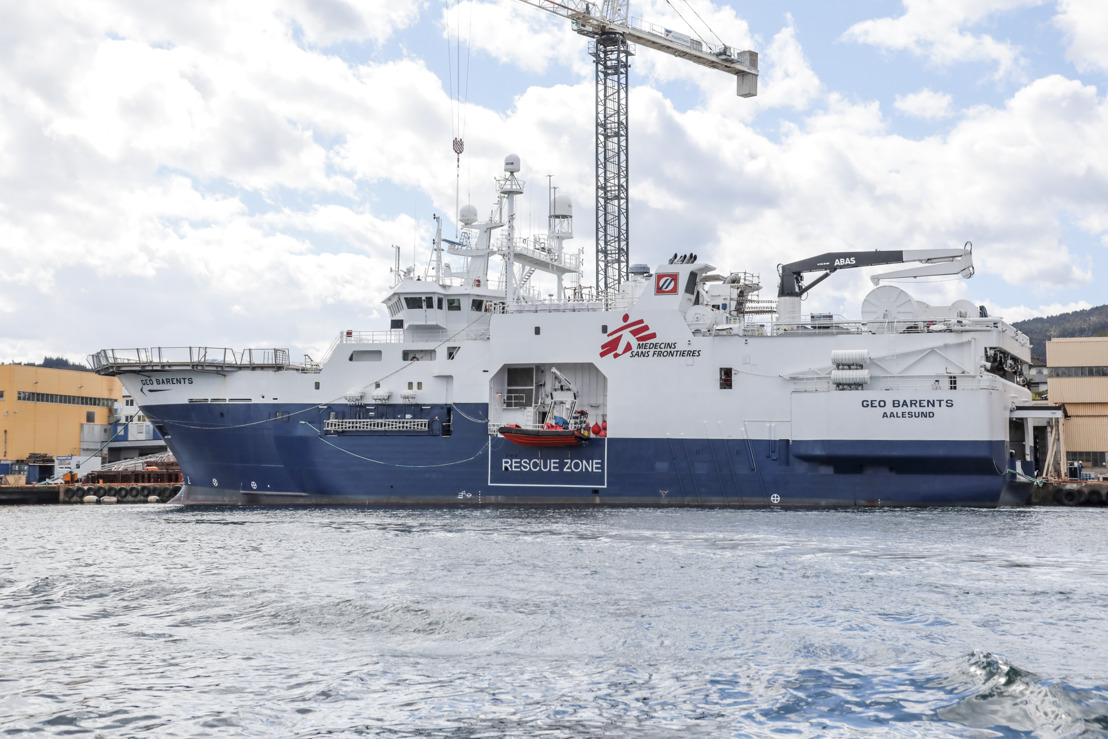 Thursday, May 13, 2021 — Amsterdam / London – Médecins Sans Frontières/Doctors Without Borders (MSF) announces today the relaunch of its search and rescue activities in the central Mediterranean to save the lives of refugees and migrants attempting the deadly sea crossing from Libya.

Since 2015, MSF medical teams working on search and rescue ships have witnessed with horror the human tragedy unfolding on Europe’s doorstep as thousands of people drown at sea or are forcibly returned to horrific conditions in Libya. This time MSF is chartering its own ship, the Geo Barents, to rescue people in danger and provide them with emergency medical care.

“Our return to sea is the direct result of Europe’s reckless policies of non-assistance at sea which are condemning people to die,” says Ellen van der Velden, MSF’s operations manager for search and rescue.

So far this year more than 500 people have died attempting to cross the central Mediterranean. A terrible shipwreck occurred on 22 April and claimed at least 130 lives. Those who do not die at sea risk being intercepted off the Libyan coast by the EU-supported Libyan coastguard and forcibly returned to Libya. Most end up arbitrarily locked in dangerous detention centres where they are exposed to life-threatening risks such as ill-treatment, sexual violence, exploitation and even death.

“Over the years, European governments have progressively disengaged from proactive search and rescue in the central Mediterranean, have failed to assist people in danger and have deliberately hindered, if not criminalised, the much-needed work of search and rescue NGOs,” says van der Velden. “These policies have abandoned thousands of men, women and children to drift at sea and to drown on Europe’s southern border.”

MSF calls for an end to EU support to the Libyan coastguard and to people being forcibly returned to Libya. “We will not stay silent in the face of this manmade disaster,” says van der Velden. “EU support to the business of suffering should stop immediately. European member states must ensure a dedicated proactive state-led search and rescue mechanism is urgently relaunched in the central Mediterranean.”

The UK Government too has exacerbated this appalling situation, having supported the Libyan coastguard through training and funding, enabling the return of refugees and migrants to detention centres where thousands of people including children were kept in inhumane conditions.

“We believe the UK Government has a responsibility to refugees and migrants who have suffered due to its actions in Libya," said Vickie Hawkins, executive director of MSF UK.  "They were well aware of the detention conditions to which refugees and migrants were being returned through their own humanitarian support to those detention centres, and so we are calling on them to now provide safe and legal routes directly to the UK. They should also contribute to state-led search and rescue in the Mediterranean, and publicly support NGO search and rescue efforts at this critical moment.”

MSF UK is deeply concerned about proposals in the government’s New Plan for Immigration outlining a system in which refugees would be punished for irregular arrivals even as the government steadily closes legal routes. The Dubs Scheme was shut last year and the government rejected attempts to secure a replacement, and a proposed global resettlement scheme has still not appeared and no date for its launch has been provided.

“People in dangerous situations like Libya have no choice over how they get to safety. They should not be left to drown or to be locked up in detention centres as a punishment for taking the sea crossing or to deter others from making similar journeys. It is not too late for the government to change course away from this mindlessly punitive approach,” says Hawkins.

For the past 50 years, MSF has been providing emergency humanitarian and medical aid to people in some of the world's most challenging crises. Today MSF is going back at sea to fulfil the humanitarian imperative of saving lives.

As per 13th of May, nearly 13,000 people arrived on Italian shores; at least 555 people died or went missing while attempting the perilous journey across the central Mediterranean. In the same time, more than 7,000 refugees and migrants were intercepted and forcibly returned to Libya by the EU-supported Libyan coastguard.

Note to the editor:

Since launching search and rescue activities in 2015, MSF has deployed medical teams on board seven rescue ships, at times operating the vessels in partnership with other organisations. In total, MSF teams have participated in 682 search and rescue operations and assisted more than 81,000 people.

The M/V Geo Barents has been chartered by MSF from Uksnøy & Co AS. Built in 2007, she was previously used as a seismic vessel and is sailing under the Norwegian flag.

The ship has undertaken necessary modifications to be compliant for search and rescue purposes. The ship’s overall length is 76,95m. It has two decks for the survivors; one for men and one for women and children. There is a clinic, a midwife’s room, and an observation room for all the medical activities that the MSF teams will undertake. The ship has two fast rescue boats (RHIBS) to launch during rescue activities.