As the nearly seven-year-long conflict in Syria evolves, healthcare needs in the region have in some cases become even more acute. The reports highlight dangerous healthcare gaps for mothers and children in the area, revealing that up to 60 per cent of children under the age of five have not received all the required doses of vaccines against preventable diseases, while there were also alarming rates of risky home deliveries and poor antenatal care.

Furthermore, the data reveals how violence has led to the displacement of almost half the population of east Daraa in recent years; in more than 90 per cent of cases households had resettled because of violence. “We spoke to people whose homes had been damaged – in some cases multiple times – by airstrikes and who are living in vulnerable conditions,” said Dr Ghassan Aziz, health surveillance programme manager at MSF´s Centre for the Advancement of Humanitarian Medicine in Amman.

“Our data shows women and children have the most difficulty in accessing adequate healthcare. Humanitarian assistance must be increased, and for people living in south Syria in particular, the most efficient way of delivering that aid is across borders.”

Given the scope of healthcare needs in the surveyed areas, MSF acknowledges the UN Security Council´s renewal of Resolution 2165 (now known as 2393) this week that calls for humanitarian agencies to continue having access to routes across conflict lines and border crossings to deliver aid into Syria.

Yet even with the cross-border framework in place, humanitarian organisations are struggling to provide assistance to 13.1 million Syrians in need of aid, including 6.1 million internally displaced and three million living in besieged areas. Access for aid organisations must increase significantly to meet growing healthcare needs.

“The cross-border delivery of aid remains a vital lifeline to millions of Syrians and is essential to meet the needs of men, women children in south Syria,” said Aitor Zabalgogeazkoa, Head of MSF´s Middle East Unit and Centre for the Advancement of Humanitarian Medicine. “The need for unhindered and independent humanitarian aid to reach those most affected by the conflict remains as urgent now as it has ever been.”

The reports are based on two large-scale community health surveys conducted in east Daraa towns and cities, an area with a population of about 200,000, by MSF teams in July 2016 and May 2017. In each assessment, community health workers interviewed more than 4,000 randomly selected individuals about their health needs and quality of life.

During 2016, in facilities directly run or managed by MSF and mobile clinics across Syria, 372,000 outpatient consultations were provided, 5,300 medical relief kits were distributed, and 2,000 births were assisted. Other facilities that are assisted through MSF’s support programmes, where MSF staff are not present on the ground, provided a total of 2.2 million outpatient consultations, 770,000 emergency room consultations and 225,000 surgical operations. MSF is not present in government-controlled areas in Syria, despite repeatedly requesting for access from Damascus. In 2016, MSF spent more than 40 million Euros to support health services across Syria, delivered mostly through the use of cross/border routes. 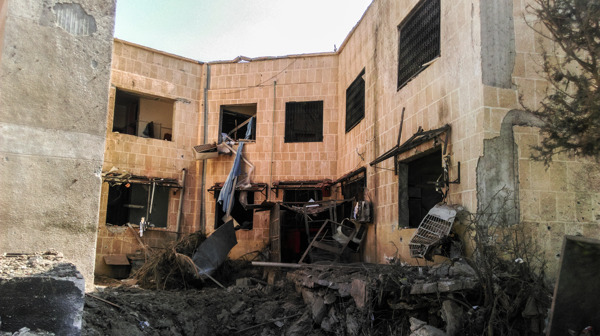