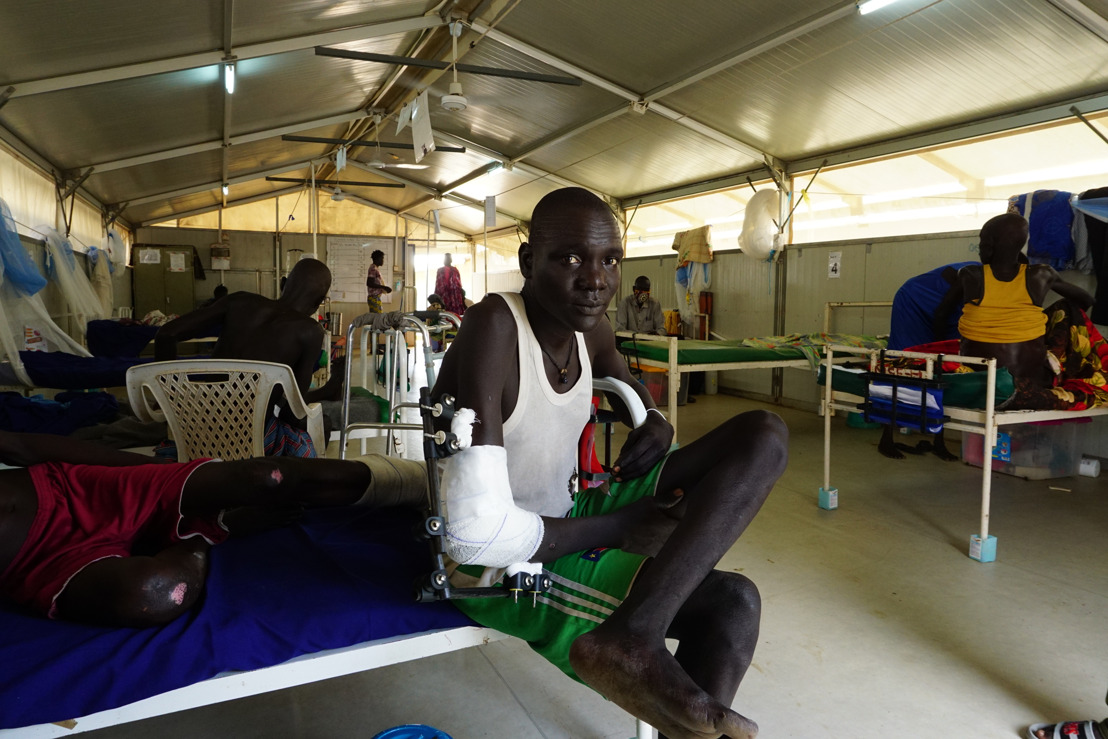 Over the course of just one week, between 29 July to the beginning of August, the MSF medical team in Pieri received an influx of 102 war-wounded patients, the youngest just 15-years-old. A further 11 patients were treated for gunshot wounds at the outpatient emergency response in Pibor relaunched on 11 August. Of the 11, six patients, including two women, two men and two children one aged only 3-years-old, were evacuated for specialised treatment. A further 36 patients from Pieri were referred for emergency surgery to the MSF hospital in the Bentiu Protection of Civilians (PoC) site and to Juba.

The numbers of patients were staggering, putting significant pressure on our medical teams.  Our hospital in Bentiu, where the most serious patients were being referred, was already stretched for bed capacity due to a peak in malaria cases. However, there are an extremely limited number of facilities within the country that have the capacity to deal with such numbers of injured and critical surgical interventions. - Tila Muhammad, MSF Head of Mission in South Sudan.

“This conflict has continued since last year. It came up again in February and then in June. It is not the first time we have had such inter-communal clashes and insistent violence. In the past it was about cattle raiding...It is now more seriously affecting our community. We are seeing the loss of property, the loss of life. We lose our cattle. We lose our children,” says Sebit Burane, MSF nursing team supervisor in Pibor.

In recent weeks heavy rains have hampered the ability to make such referrals. Additionally, restrictions from COVID-19 continue to slow down the speed at which MSF can safely give consultations and evacuate patients, as well as send supplies and deploy key staff in these areas aggravating an already volatile situation.

MSF commenced an emergency response in Pibor on 11 August, nearly two months after activities were suspended due to immense restrictions directly and indirectly related to the COVID-19 outbreak and rife violence. MSF relaunched the emergency outpatient primary health care activities in the centre of Pibor town so that it may be easily accessed by both host and internally displaced populations.

“We are relieved to be finally providing primary health care at a time in the year when normally this community suffers from malnutrition in the lean season, and high rates of water borne diseases and malaria at the peak of the rainy season,” said Josh Rosenstein, Emergency Coordinator for MSF in Pibor. “But equally, MSF is disheartened and disturbed to hear testimonies from our patients and our staff about the impact the violence of the past months has had on people. Although security is returning, the plight of people will be extremely harsh still for weeks to come as many have lost family, their homes, socio-economic insecurity, dignity and basic access to health care.”

One young mother shared her experiences while being admitted to the clinic: “We have been living a miserable life. This all started in February, and we would have never expected this situation to last for long…I ran into the bush with my sick three months old daughter. She was sick and died in July. Today is the first time that I have had access to a healthcare facility since February.”

MSF calls upon all actors to urgently prioritise delivering the much needed humanitarian assistance to this population and parties to the violence must respect the safe delivery of emergency humanitarian relief by aid workers.

A timeline of violence

Over the course of 2020, the Jonglei-Pibor region has experienced extraordinarily high levels of violence.

February – the MSF team in Pibor set up an emergency clinic in response to large numbers of displaced and wounded arriving.

March – MSF’s clinic in Pieri received 68 wounded patients in just 12 hours. In that same wave, we treat 15 people in Lankien and 45 wounded people in Pibor.

May – fighting reaches Pieri. Among those killed in an MSF staff member. Local authorities estimate that 200 people died in total, around 300 were wounded. MSF staff had to evacuate and operations were suspended for two days.

July – Fighting continues with MSF teams in Pieri receiving more than 100 wounded people in just one week from 29 July to early of August.