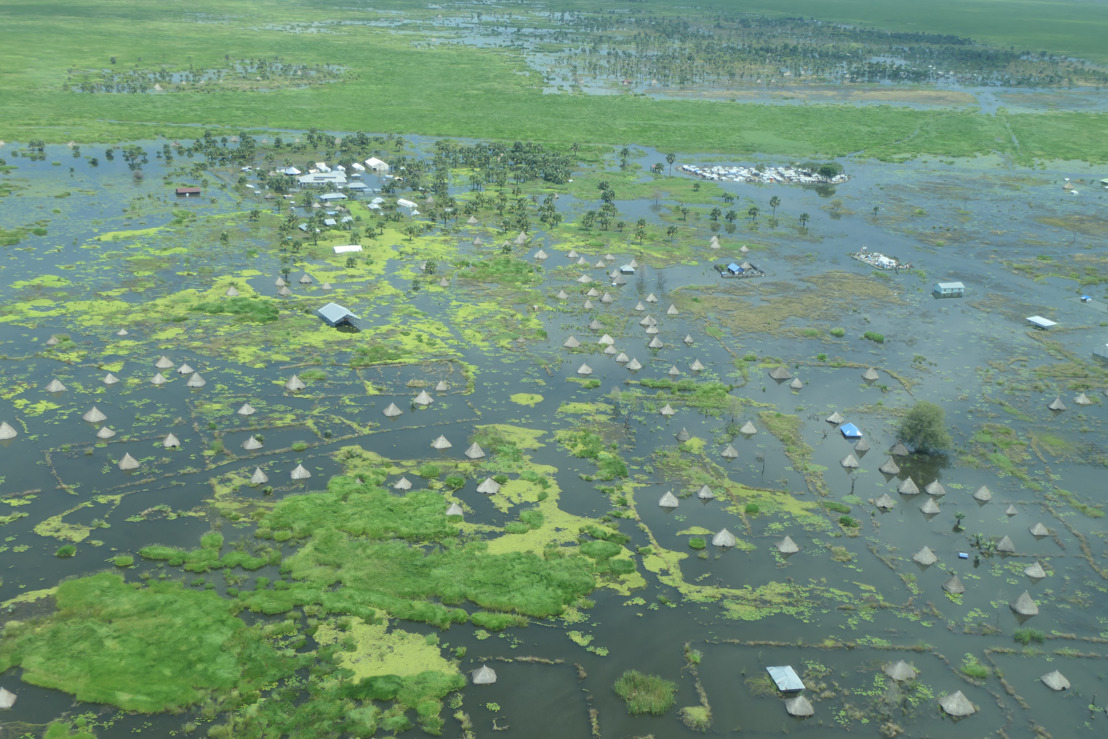 People are in need of immediate assistance, including medical care, food and safe water and non-food items such as shelter, mosquito nets and cooking pots.  Access, which is a challenge all year round in South Sudan, is further worsened by the floods, making it more difficult for people to access basic life-saving services, as well as for humanitarian actors’ to reach them directly with much of the flood-affected areas inaccessible by road. Since May this year, flooding has hit 8 of the 10 states, with Jonglei, Unity, Northern Bahr el Ghazal and Upper Nile the worst affected.

In Bentiu town an estimated 25,000 newly displaced people have arrived and are currently divided between four makeshift camps.

Despite the UN building and reinforcing dykes in the area there is a huge risk they may collapse leading to even more mass diplacement. On 6 November, half of Rubkona town was flooded after a dyke broke nearby. Early estimates are that 20,000 people were forced to move to the main Bentiu IDP camp because there was nowhere else to go.  The number of people in the camp has reportedly grown from 108,000 to 120,000.

Food security is a major concern in the camp.  Rations from the World Food Program (WFP) were cut from 70% to 50% in April 2021, and these do not cover the thousands of new arrivals. Families are sharing their rations with up to three households and our teams are already seeing malnutrition rates already well above emergency thresholds.

We are seeing an increase in water-borne and vector- borne-diseases like acute watery diarrhoea, respiratory tract infections and malaria, which are already three of the biggest killers in South Sudan for children under five.  Sanitation in the camp is horrendous with dirty latrines, overflowing and in disrepair.  There were already very few functioning toilets in the camp (10 times below the minium internaional standard required) and with the sewage treatment site cut off by flood water for two weeks, there are now next to none.   Sewage runs into open ditches which lay stagnant and full of rubbish. The risk of outbreaks of deadly diseases like cholera is high, with a Hepatitis E outbreak still ongoing.

The UK Aid cuts, which saw funding for South Sudan drop by nearly 50% from £135,347M in 20/21 to £68,400 M in 21/22 (source: FCDO Annual Accounts and Report 2020-21),  have contributed to the risks that the population face from disease and the lack of access to adequate health and water/sanitation, even before the recent floods. The UK must ensure that they step up and provide the required funding for essential health and water/sanitation as well as for the emergency flood response.  Now is not the time for the UK to cut aid.

MSF are also calling for an immediate scale up from other NGOs, the United Nations, the Ministry of Health and the government of South Sudan, with increased food and nutrition assistance, water and sanitation services, shelter and health services.

MSF have sent an emergency team to Bentiu to support our regular operations. The team are running mobile clinics providing basic health care, nutrition, routine vaccination and SGBV care to the 25,000 people in four makeshift IDP camps in Bentiu, and have set up disease surveillance and monitoring in the main Bentiu camp.  Since 2 November, we have provided over 1,700 medical consultations at these mobile clinics, mostly for malaria, acute watery diarrhoea, respiratory tract infections and malnutrition. We're working on community water and sanitation conditions in Bentiu camp with emergency latrine emptying, cleaning and repairs. We are also assessing the available water supply.