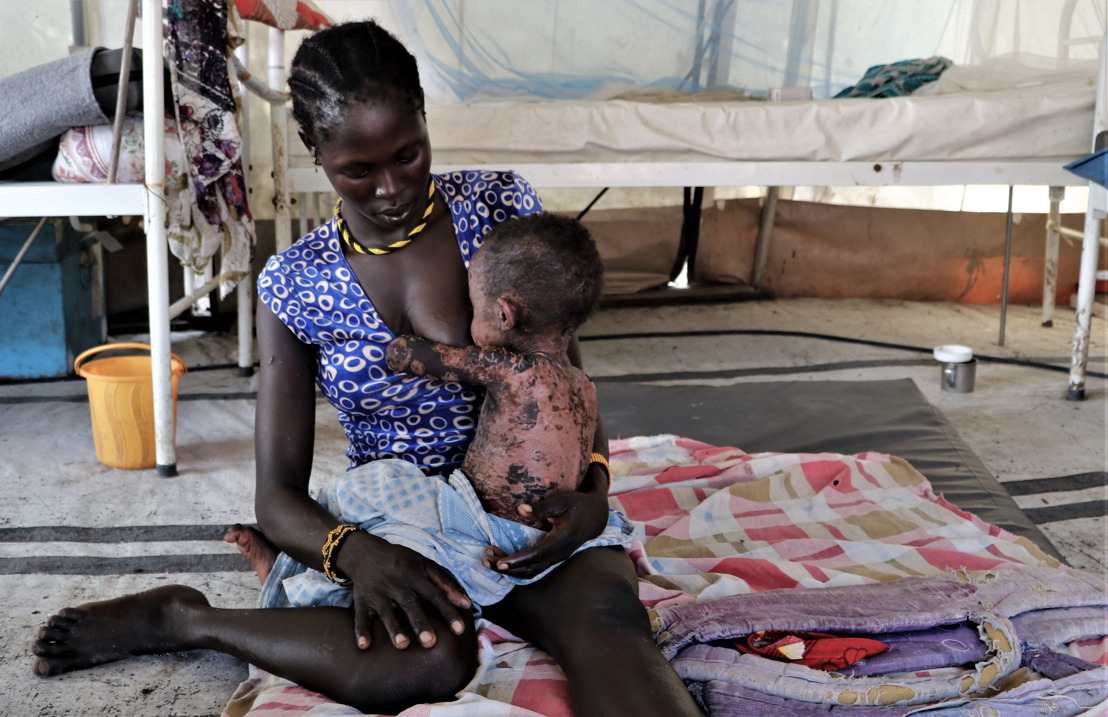 “We believe measles is now widespread and getting out of control. It is especially concerning that the Greater Pibor Administrative Area is flooded and in emergency. We started with four, then six and then 18 isolation beds,” says MSF’s Dr Adelard Shyaka. “At the moment we have 30 children with severe measles receiving treatment in our health facility.”

When MSF began responding to the outbreak in August, patients were mostly coming from central Pibor town, but now the disease is spreading. Many people are walking and paddling through stagnant and moving water, sometimes for up to seven days, to reach care at MSF’s makeshift healthcare clinic in Pibor.

“The severity of the outbreak is being magnified by other illnesses like severe malaria, pneumonia and severe malnutrition. Two children have already died and we are deeply concerned that without a prompt reactive vaccination campaign, more children will continue to die,” says Dr Shyaka.

There are many children in Pibor who, having fled fighting or the floods with their families, are living in close contact to each other. Children with measles are generally expected to infect around 12 to 18 other people during an eight-day period in which they are infectious (four days before and after the onset of rash).

“We can expect the infection rate of measles in Pibor today to be alarmingly higher than these estimates,” says MSF epidemiologist Laura Wright. “A total 71 per cent of patients are under one year of age. This is likely due to a disruption of routine vaccinations, resulting from the flooding that also happened this time last year and the ongoing conflict.”

MSF has been calling on all health organisations in South Sudan to urgently implement a wide-coverage reactive vaccination campaign since 31 August, after six measles cases were confirmed by laboratory. Measles is a highly contagious disease that is transmitted through the air. There is no specific treatment once someone contracts it, but a well-conducted vaccination campaign is extremely effective to prevent new cases. In areas like Pibor with large-scale movement of people and low immunisation coverage due to insecurity and access challenges, vaccination can reduce infant mortality by 50 per cent.

In the last 11 weeks, MSF has treated over 15,624 patients, including 6,290 children under the age of five.  More than half have been treated for malaria: a number far above normal for this time of year. MSF has also treated 1,700 children under five for respiratory tract infections and 699 for watery diarrhea, and is responding to rapidly increasing numbers of patients with malnutrition.

Teams are delivering healthcare via six mobile clinics operating in villages on the periphery of Pibor, and via a health facility located in the town. MSF is supporting water and sanitation activities, distributing about 60,000 litres of water daily.

MSF’s emergency responses include assistance for internally displaced persons in the UN Protection of Civilians sites, and healthcare for people affected by malnutrition and peaks of disease such as measles, malaria, acute watery diarrhoea and kala azar, in addition to providing basic and specialist healthcare services.