Monday, March 19, 2018 — “Two years ago the European Union and its member States failed thousands of people and compromised the very concept of asylum when they agreed and implemented the EU-Turkey deal, which allows the EU to return refugees and migrants arriving on the Greek islands to Turkey", says Konstantinos Antonopoulos, Policy and Advocacy Adviser for MSF UK.

Since then, Médecins Sans Frontières’ medical teams on the Greek islands have witnessed daily the misery and desperation created by this deal. Thousands of men, women, and children from countries such as Syria, Iraq, and Afghanistan continue to arrive on the Greek islands, seeking safety from war and violence. The EU and Greek authorities’ policies trap them there, often for months, as they wait for their claims to be processed. These are the people who pay the real cost of this dirty deal,” says Antonopoulos.

Living conditions in reception facilities on the islands do not meet basic humanitarian standards and are the result of both overcrowding and recent reductions in services. MSF medical teams working near Moria camp on Lesbos continue to see many children under 5 years old suffering from respiratory conditions, diarrhea and skin diseases as a direct result of living in these facilities.

Whilst the transfers of more than 8,000 people from the islands to the mainland over winter helped to decongest the overcrowded reception facilities, more than 5,400 people still live in a camp for 2,300 in Lesbos’ Moria; 2,000 in a camp designed to host 700 people in Samos; and around 1,300 in Vial camp in Chios. This overcrowding is only about to get worse as more than 589 people arrived on the islands in the first two weeks of March alone; 1191 arrived in February and 1648 in January.

MSF’s mental health clinic on Lesbos is overwhelmed, responding to a high number of acute cases with immediate needs, others with PTSD, anxiety, trauma, and depression. Many inflict self-harm or have suicidal thoughts. Most of our patients have lived through extremely traumatic experiences in their countries and suffer from mental health problems related to war and trauma. After the consultations, staff can do nothing more than send these people back to the same tents, overcrowded containers and legal limbo that cause or compound their suffering.

“Today and every day as MSF we will continue to firmly oppose a deal that is not focused on improving the protection and assistance of those in need but instead seems deliberately intended to produce suffering for those who cross the sea, with the idea that this will deter others from undertaking the crossing.  Not only is it cruel, it simply does not work. With no alternative options, families from countries like Syria, Iraq, and Afghanistan continue to risk everything on a daily basis in order to reach European shores," ​says Antonopoulos.

"We will not stop demanding that the EU and the Greek authorities end this cynical strategy of containment, stop further damaging the health of our patients and respect their dignity.”

The EU-Turkey deal was announced March 18, 2016, and implemented March 20, 2016. In June 2016, MSF announced it would no longer accept funds from the European Union and the Member States, in opposition to their damaging deterrence policies and continued attempts to push people and their suffering away from European shores.

MSF is providing primary health care to children and pregnant women living in Moria camp, on Lesbos island, and is providing mental health support to the most vulnerable cases in a mental health clinic in Mitilini.  MSF is also working with refugees and migrants in the islands of Chios and Samos and in Athens where we provide several services to victims of sexual violence, torture, and to all those migrants and refugees who have difficulties in accessing medical and mental health services. 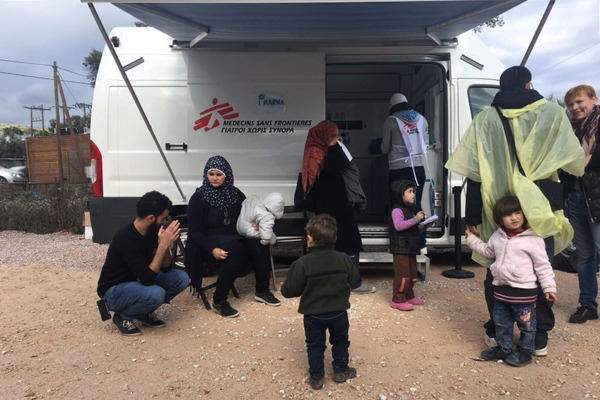